1. A nonhuman or Alterhuman self-identifier to describe one’s identity being caused by, rooted in, or greatly influenced by [a] delusion.
“I’m an Endel. What Endel am I? I am Endelcanine.”
“What’s your Endel? My Endel is cats, I’m an Endelcat!”
“My Endel is Edward Elric from Fullmetal Alchemist.”

“Endel” was created for delusional nonhumans or Alterhumans only. It should not be used to insult others, or to suggest they may be delusional; Endel should only be used as a self-identifier. It was made to describe the experience of having a nonhuman or Alterhuman identity that is related to one’s delusion(s,) as well as to recognize and express the relationship mental health has with nonhuman identities. 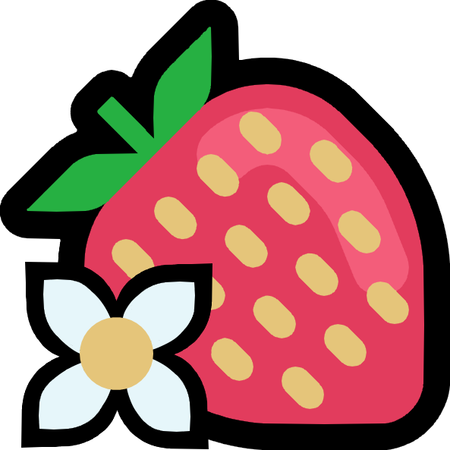 Endel's official symbol: A strawberry with a small, white, four-petaled flower beside it.

A strawberry with a small white flower was chosen for it's symbolism: fruits are seasonal, much like how delusions come and go, or can be more tolerable some days compared to others. Delusions can also be good and unharmful, such as sweet and ripe strawberries are delicious. Others may be rotten and bitter, like how delusions can be hurtful. The flower represents the beauty even in dark things. A runner (small vine) is optional in it's design, as strawberry runners may be used to show solidarity between Endels. 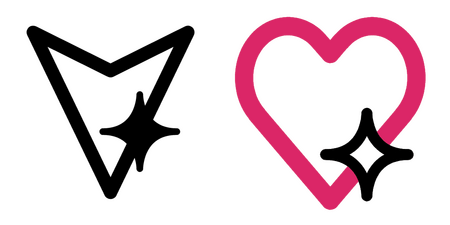 Alternative Endelic symbols: A simple downward-facing arrowhead with a small 4-pointed-star at the bottom right; it is uncoloured. The other is a pink-coloured heart with a white four-pointed star on the bottom right; the colours of the heart and star are not important and can be changed to any colour if that is desired. 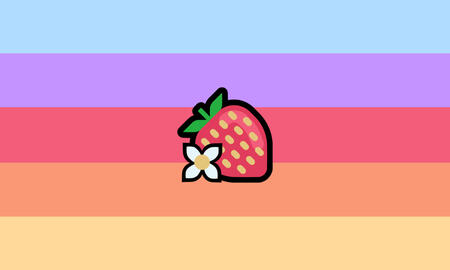 Endel's Official flag was created by pupyzu on August 18th, 2021.
"🍓solidarity among endels: i used blue to represent solidarity between different sub-labels of endel (such as myth endel, terendel, fictendel, etc)! i chose sky blue specifically as it represents community and trust!
🍓psychotic / delusional pride: i used lavender to represent psychotic / delusional pride to correspond with the schizo-spec flag! i couldn’t find a delusional pride flag specifically so i just stuck with purple!
🍓endel community: the middle stripe is color picked from the strawberry endel symbol!
🍓being nonhuman / alterhuman: i chose salmon orange as i personally correspond orange with being nonhuman and alterhuman!
🍓solidarity with adjacent communities: i chose light yellow as it is in the otherkin flag, as well as being within the same color family as the therian and alterhuman flags!"
Alternative versions of Endel's flag and creation post can be found here.

All Endelic symbols are free to use.
~🍓~

The use of Endelic sub-labels is entirely optional.

will be updated as more questions arise

Q: I’m part of a system. Can I use Endel?
A: Yes! (and no - it doesn’t matter what your system’s origin is. You are welcome to use Endel.)

Q: I no longer live with delusions, but experiencing them deeply influenced my alter/nonhuman identity permanently. Can I use Endel?
A: Yes!

Q: How can you tell the difference between being Endel and being Otherkin?
A: There isn't a definitive answer to this. For me (babydog,) it was just that being honest with myself about being a delusional alterhuman felt so right. It helped also knowing that "Otherkin, Therian" and other alterhuman labels just didn't feel comfortable for me - it may not be helpful, but my identity boils down to just... Knowing. For others, they were able to tell because their alter/nonhuman identity felt "stronger" or more present at times where their other delusions were as well, or they have other psychotic symptoms which influence their identity. In the end, Otherkinity and Endelity have a lot in common as far as shared experiences go.

Q: My delusions are caused by bipolar or depressive episodes, can I use Endel?
A: Yes, I only use “delusional disorder” and “psychosis” for the sake of length/character count. If you experience delusions you can use Endel.

Q: I’m mentally ill but not delusional, and I like the term Endel. Can I use it?
A: No; this is a term for delusional people, by a delusional person; and that it would be a very very poor way to describe your experience considering “Endel” literally means “delusion-caused!”

Q: I’m a kinnie/kin for fun or copinglink, can I use Endel?
A: No, delusions are involuntary. Again, this would be a very poor way to describe your experience.

Q: Can I use Endel alongside other Alterhuman self-identifiers? EX: Otherkin and Endel, Endel and Alterhuman, Endel and Fiction, Endel and Therian, etc?
A: Yes! So long as the term you’re pairing it with is also involuntary, it’s being properly used.

Q: Do I have to use Endel to describe my identity, if my identity is delusion-rooted?
A: No, it’s entirely up to you. If you prefer to identify as something else such as Otherkin, that’s your choice.

Q: Do Endels totally and completely believe they are their identity? Can they be convinced otherwise in face of evidence?
A: Yes. Some days their identity may not be as influential on their life, due to how delusions can come and go, but at their core, the person experiencing it will fully believe they are their Endel. Evidence or proof of non-existance has no effect on delusions, and if it does, it is not a delusion.

Q: Can a person experience a "delusional attachment" and an Endel at the same time? Are Endels anti-DA?
A: Endels are individuals who speak for themselves. Being Endelic in and of itself has no effect on morals or opinions from individuals.

babydog thanks all contributors to the creation of "Endel." Endelity would not exist the same without community contributions and support.